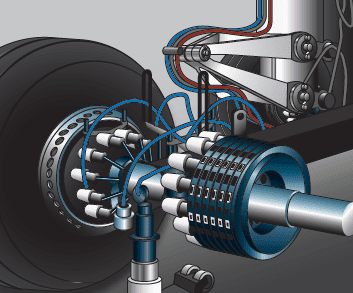 The rising demand from OEM and an increasing number of commercial flights fuelled up the market growth during the forecast period from 2021 to 2026. Therefore, the global aircraft braking system market is subjected to a CAGR of 3.6% and is projected to reach USD 10.9 billion in 2021 to USD 13.1 billion by 2026. Furthermore, according to experts, In 2020,  the Covid-19 pandemic has affected aircraft braking system services and production by 7 to 10 % globally.

The prominent players of the aircraft braking system market are  Parker-Hannifin Corporation (US), (UK), Safran,  Crane Co. (US), Honeywell International Inc. (US), and Meggit PLC(UK). These players operate in different regions, including Asia Pacific, North America, Europe, and Latin America.

OEM is a vigorously growing segment

OEMs are in charge of installing the braking system in an aircraft at the assembly stage and are made available for delivery to the aircraft manufacturers. Over the years, there has been significant increase in the demand for different aircraft types across regions. For example, in 2019, airbus has delivered 863 commercial aircraft to 99 customers. Therefore, the OEM segment is estimated to grow at the highest CAGR value during the forecast period 2021 to 2026.

UAVs (Unmanned Aerial Vehicles) are commonly termed drones and are used in various military missions like border surveillance. They are also utilized for surveying, mapping, and determining the weather conditions of a particular area. In addition, specific remotely piloted UAVs are created to operate as loitering munition for defense forces. Hence, the unmanned aerial vehicles segment will boost the CAGR rate for the aircraft braking system market during the estimated period.