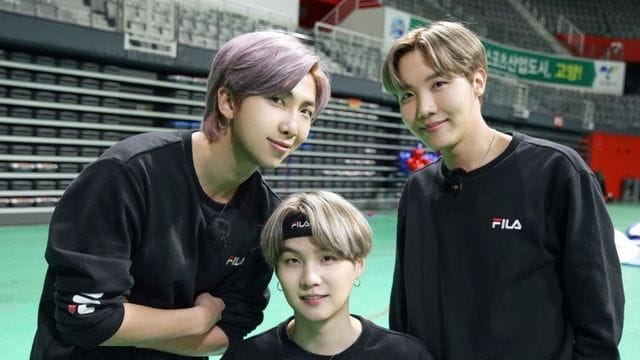 South Korea’s football squad did their country proud by defeating Portugal 2-1 in Group H of the FIFA World Cup and qualifying for the knockout stage of the tournament. South Koreans throughout the world celebrated the achievement, including BTS members RM, Suga, and J-Hope.

On Instagram Story, the three K-pop stars reacted to Korea’s victory. They took screenshots of themselves watching the game on television and expressed their delight at South Korea’s victory against Portugal in the FIFA World Cup 2022.

“Best Day Ever,” RM wrote in Korean with a photo from the match. Suga also posted a picture from the event. J-Hope, on the other hand, wrote, “Round 16!!! Great Job By our players! “in Korean. The ‘Jack In the Box’ hitmaker also shared a video of himself dancing to Dreamers, the FIFA World Cup 2022 anthem sung by his bandmate Jungkook.

The Koreans finished second in their group on Friday at the Education City Stadium, trailing leaders Portugal, who had already qualified for the last 16 rounds prior to their encounter against the South Koreans. Portugal led the group with seven points, followed by South Korea, Uruguay, and Ghana, each with four.

The South Koreans produced the second major upset in two days, with Japan defeating Spain on Wednesday to advance to the next round as group leaders. The Koreans, on the other hand, finished second and advanced to the Round of 16 for the third time in eleven World Cup appearances.

Portugal advances to the final 16 after winning Group H, where they will face Serbia, Switzerland, or Cameroon. South Korea’s reward for coming second is a match against Brazil.

South Korea will join Japan, Spain, Morocco, Croatia, Argentina, Poland, Australia, Portugal, Brazil, England, France, the Netherlands, Senegal, and the United States in the knockout stage. The final and final team will be decided in Friday’s group matches, with Serbia, Switzerland, and Cameroon vying for one spot from Group G.

Percy Jackson and the Olympians Release Date: Is the Premiere Date Confirmed by Disney?